Ed.: This was supposed to post on Halloween this year as a companion piece to Pavarti's post of the same story from another perspective. Alas, I was too occupied with more important writing-related work (I'll get no arguments from Pavarti) to finish it, so I'm clocking it in late. Sorry, super-fans!

Even as the seeds of our relationship's destruction were being sown, my first love saved my life.

Let me back up a bit.

I got sick a lot as a kid. I have to some extent been a method actor all my life, which is to say that I've felt that believing the circumstances wholly is the best way to a convincing performance. A healthy dose of masochism doesn't hurt either. Odds are that about half the sick days I took in high school were more like anxiety days, or self-flagellation days. Still, I believed them, even without that important DefCon 1 of childhood illness: the antibiotic.

You knew if you actually went to the doctor, and the doctor actually prescribed something, then you were sick, real and true. In the autumn of my senior year of high school there was a lot going on, and I really did get sick. I was put on just such an antibiotic, and deemed therefore fit for society once more. I was glad for that, since the day was a holiday, and my favorite one at that. On Halloween Day, 1994 - a Monday, as it is this year - I returned to school, fortified and ready for all the excitement once more.

The thing I will always remember are the tiny black specks.

It could have been caused by anything. My mom always gave us a double-dose of whatever antibiotic we were prescribed right away, to jump-start the blood levels. I could, in fact, be allergic to this particular cocktail of micro-organic missile, as my every doctor's form has reflected ever since. Or maybe, just possibly, I rushed through my regular breakfast routine that morning without stopping to consider that the semi-viscous substance suspending my Rice Chex in that bowl was, in fact, milk. And maybe, yes, there was a certain bovine injunction on the side of the orangey, childproof bottle. I may never know.

I may never know because the day itself is an astonishing blur. Not the kind of blur one associates with tremendous speed or urgency, either. Rather, the sort of blur that happens when something is smeared across, or great heat melts something, or some synthetic psychoactive drug chooses to make a mess of your internal relativity. Or, as was the case with me that Halloween Day so long ago, all three, concurrent and consecutive (see note about internal relativity).

Sometime not too far into the school day, maybe after first period, I started to feel nauseous and following fast on the heels of that sensation I vomited into a garbage can. I had the nurse call my mom. Luckily for me, she worked at an elementary school just down the road and had the time to swing by to take me home. I remember lying on my left side in the back of our maroon minivan, trying not to be sick even as I contemplated whether I was making the right choice. I was feeling better. Maybe I could make it through the day, and on into the night's festivities. This thing could still be saved.

It's difficult to remember these events, but not solely because of my altered state. No, as with many other times in my life that proved to be turning points, I've blocked out a lot of details of sequence and experience in my memory. Although I recognize I have a tendency to get mired in my past, I also have a great deal of trouble letting go of my own volition, and so I frequently and by default "forget." That is, "wall memories off where they are forced to live in confinement forever and/or until some silly, silly suggestion that I give them some air is made." It's a bit of an effort to dredge some of this up.

At the time, in the fall semester of my senior year, we were rehearsing a show called Stage Door, in which I played the closest thing to an antagonist the story had. Senior year represented a sea change in my high school experience, having gone far too quickly from chubby band nerd to skinny, upperclassman, leading-man-somewhat-by-default drama nerd. My dearest, passionate, first true love was a junior, but making more headway in choosing a college for the next year than I was. I had also - extremely unexpectedly and as a result of an acting exercise brought to us from a summer intensive our stage manager attended at Northwestern University - recently fallen for my co-star.

A memory doesn't have to be painful for me to quietly wall it away in the intervening years, just embarrassing. This one happens to be both.

I think I went straight to bed when I got home that morning. I think I might've tried water and toast at some or several points, in the hopes of hanging on to the idea of healing. I think I heard the phone ring once or twice. But I know that by the time the phone started ringing I had already vomited at least three more times, and resigned myself to staying in the bathroom. Eventually, the floor of the bathroom became the best place I could imagine and so I laid there, years before I would ever experience the divine punishment of alcohol. By the time I heard the front door opening and my girlfriend's voice calling my name, I was pretty certain it was  a hallucination.

The door to the bathroom was closed at first. Was the bathroom door closed at first? At this point it's all a mess of fingerpaints in my mind. She was always lightly on the goth/punk side - Doc Martens strapped on over fishnets, but a girlish giggle as easily and likely as a throaty guffaw. I'm not sure, but I think my guardian angel was even more punk that particular day, in a nod to the holiday. Regardless of when I let her see me, I somehow remember bright sunlight coming in from the open door downstairs, that same door that still displayed the knuckle-dents from when I punched it in frustration the previous May and broke my metacarpals. The pain of that was fresh in my mind, and it had nothing on what my abdominal muscles were going through as I spasmed and vomited yet again.

That's a bold sentence when you're a teenager, for any occasion, but especially when you've just skipped school to check on your sick sweetheart. I didn't try to stop her. I stared at the results of my latest heaving in the bowl, and was baffled. Nothing but a little clear fluid, but swimming with tiny, black specks. It was almost funny.

Later, in the emergency room, they would tell me that those black specks were the scrapings of the bottom, the digestive granules produced by the...bile duct? Something. By that time I had been on an IV for dehydration for hours, so I really should be able to remember. Strange that I would let that particular detail go. Maybe it takes days for dehydration to kill you, even when it's accelerated by an allergic response (or whatever) but I certainly wouldn't have made it to the emergency room until late into that night if it hadn't been for my girlfriend knowing it was time to break the rules.

She's always had that kind of unconventional clarity. That's the quality, I think (though also to a lesser degree the fishnets) that made my initial attraction to her so strong. I think of her as one of those kids who never knew they weren't an adult, and now that she is an adult she's got all that assumed authority the years bring to back up her keen perception and audacity. I'm proud we're still friends after all these years, after long stretches of no contact, after I shoved the self-destruct button quietly down on our relationship, after all kinds of personal emergencies and my inauspicious and unrelenting crush on her that started it all.

Having now lived twice the number of years I had then, I'm not sure I can claim any greater wisdom. Nowadays, a lot of the gusto of that time of my life seems smarter than where I am. Certainly not all of it, but much of it. Teenagers have an emotional sincerity from which we can always learn a little something. While age may not have increased my wisdom, distance has bettered my perspective.

I can see now that it was all a little funny and a little horrible, and even that those two aspects are usually paired up to some degree. I see past the imagined drama and the true consequences that it's a story about people who love each other. In fact, struggling through the melting, smeared mess of my memory of this event has helped me see myself a little clearer, even as the teenager I was, the woman who loved me, the girl who surprised me, our teachers and parents and friends of that time fall farther and farther away, into the distance, into tiny black specks.
Etched by Jeff at 11:23:00 AM 4 comments:

See the guy? I want to be the guy. 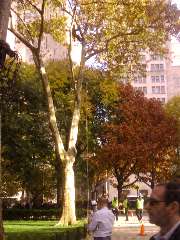