On Sunday I had a previously-taken-for-granted treat: a day hanging out with Sister Virginia. It was Pride Day, but we didn't have terribly exciting plans. Just a little browsing around SoHo, visiting old haunts and generally enjoying one another's company. It was sweltering day, humid as it gets up here in NYC, and we were deep into conversation as we got on the subway platform at my stop, Astoria Boulevard. Can't recall what we were discussing. What I can recall, is being insistently spoken to by a stranger. You know that feeling, when you've recognized somebody wants somebody else's attention, but of course it couldn't be you, because you don't just run into people, but then - oh, wait - yes. Yes, that person is talking to you. And what they're saying, is this:

And she marches past us, down to the far end of the platform.
So: Fine. Another New York crazy person. True, she didn't exactly bear the marks of the typical NYC loon -- she was very clean, small, well-dressed (as though for yoga or the park) -- but she did have that sheen to her glare that suggested a certain intensely unkempt morale. So: All right then. Jenny and I continue our conversation, veering only momentarily into "that was odd" territory.
And then, a few minutes later, our sudden enemy crosses back the other way.

"I guess you must be Team Shawna, but I'm Team Natalie, and you better stop bothering me." (Ed. - I can't remember what she said verbatim, but I'm pretty sure the name Shawna was mentioned.)
"I'm sorry. We don't know what you're talking about."

Because sometimes The Man makes shilling for him just too much dang fun: 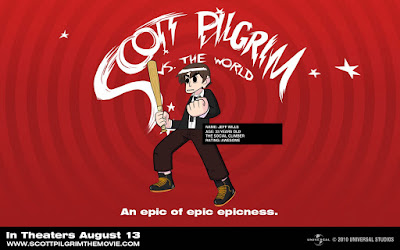 Yes. Yes, I am looking forward to the movie. No; no I haven't read any of the books. Yes, yes I remain at heart a frustrated teenager.
Etched by Jeff at 12:07:00 PM No comments: 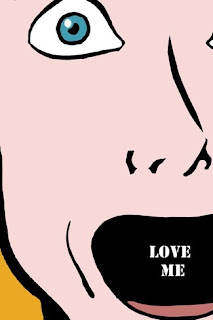 We've had two performances of Love Me thus far, with four remaining over the course of a couple of weeks, which may seem strange but is pretty par-for-the-course when it comes to theatre festivals such as this. Of the two in the bag, the first was certainly my best, but the second wasn't particularly bad. It felt not dissimilar from most second-night performances, rather off-kilter and maybe a bit flat, which I was hoping to avoid by having a day of rest between opening and our second show. I suppose it wasn't meant to be. The sophomore slump can not be avoided by mere paltry circumstance.
In any show, one rehearses without an essential member of the cast: the audience. We never know how things are going to play out, what energy and emotions the room will contain or need pumped into it until those seats have a few willing participants. This is particularly true when you are faced with a lot of direct-address material, as I am in Love Me. I knew I wouldn't know what I was doing--not really--until I had that scene member who somehow refused to show up for rehearsals, and I don't mind telling you I was pretty nervous about that. I've been avoiding clown work in large part because of the vulnerability of that relationship, and this show hinges in part on the conceit of my character being embraced from the word "go." He opens the show, and if the audience doesn't like him, or doesn't get it, well . . . shit.
Most fortunately for me, on our opening night we had a very supportive audience who "got it." It was thrilling, actually, to succeed with the first couple of jokes, and I felt that we were all on the same page and synchronous. My very first line was an addition by the director, Daryl, and is about as simple as you can get: "Hi." I'm grateful as get-out that he added it, though. In its simplicity, it transforms traditional soliloquy into a more accustomed, casual relationship. It adds ease to the whole thing, and lets the audience know that my character isn't there to narrate -- he wants to be friends. This carries through the play in very important ways, but also lets the jokey exposition that follows be not just comprehensible, but intentional:

"My name is Charlie. This is my story. His story. Our story. Or at least how I remember it. I've changed the names for fear of retaliation. If you think this is about you, it might be. That's me too. [Indicating CHARLIE.] That's actually the real me. I'm just what's going on in his head. My head. Our head."

From there, my dialogue consists of one-liners and very brief inter-scene monologues. The rest of the time all my contributions to scenes are physical work, representing at various times: 1) how Charlie feels, 2) what Charlie wants to do, but doesn't, and/or 3) guidance/criticism of his words and actions. At first I worried over the inconsistency of these representations; I thought they might be difficult for the audience to track and find cohesive. I'm finding, however, that so long as the audience accepts me as a character in my introduction, they go on to be thrilled with any complication or interruption I can add to a scene. There still exists the very easy possibility of over doing it, but I'm comforted to know that yes, the Inner Monologue (I.M.) is a scene partner they're willing to play with.
Interestingly enough, my experience with the audience has reinforced the arc that Daryl and I essentially had to create for my character. In the end, I.M. SPOILER ALERT is given the shove-off by Charlie, who has found a certain sense of self-worth that doesn't rely on his little helper SPOILER ENDETH. When we began rehearsals, I had the idea that I.M. was actually an sheer antagonist, whom we don't discover is working against Charlie until the final scenes. Daryl, however, kept working with the idea that he is a kind of bipolar guardian angel who loses his influence toward the end. As a result, when Charlie and I have our last scene, I played it as a defeat, but Daryl kept pushing for it being a kind of agreement. I went with my director, and the audience has supported this idea. They really enjoy I.M., and in this way I'm able to give them a more comprehensive character arc as well. The ending has a feeling of inevitability without being obvious, but there's no way we could be sure of that until we played it with the missing cast member.
Etched by Jeff at 12:09:00 PM 2 comments:

So, I'm super lame, and still haven't edited the footage of The Spectacular Scrantonian Spectacular (see 2/16/10 for details) together and posted it on the interwebs and made us all famous. I guess, on some level, I fear fame and the changes it may portend. Fortunately for the world, Alicia Grega-Pikul and Kate Chadwick have no such trepidations. And so, one of my favorites from the Spectacular:
Etched by Jeff at 9:14:00 AM No comments:

"Screwball" is a term for a particular sort of comedy, but these days the particulars of the sort are a little difficult to pin down. The term originated with the coincidence of a baseball pitch and the popularity of a particular type of Hollywood movie, and so most people define a "screwball comedy" as a film from a very specific time period in which romantic entanglement provides the conflict for slapstick comedies about class differences and mistaken identities (and Connecticut?). That is all pretty clear-cut, but the term has gone on to describe other, less-specific forms that adhere to many of the same elements. A screwball comedy is not the same thing as a romantic comedy (especially lately), as it usually incorporates more farcical elements with a strong female lead. Strong, in this context, meaning she has a deliberate and dramatic effect on the story and other characters, not that she's just sassy. Given certain rises in the popularity of female protagonists and the reticence of some to use (or even know of) the farce genre, lots of things get lumped in under "screwball" these days. Personally, I use it to describe any film or play that up-ends conventions and incorporates a little light-hearted love and violence.
I consider the play I'm rehearsing now, Love Me, to be a screwball comedy. You could also call it a romantic farce, but frankly I find it just a bit too screwy for that. It has the requisite strong female leads and the struggles to overcome ridiculous romantic adversity, and plenty of slapstick. The emphasis, however, isn't on sex (except when it is) and there is that strange convention of playing someone's inner monologue. Maybe "magical realism" is applicable, but come on now: way too many dick jokes for that kind of nonsense.
I'm having an absurd amount of fun working on the show. It's hard work, and a sort of work I haven't done in some time, and for both of these reasons it is cathartic and rewarding. The overwhelming feeling I have is of returning to a very pure, unpretentious style that came naturally to me in my early twenties, which is as much as to say that this rehearsal process makes me feel younger. I hadn't realized I was losing touch with something valuable when I got serious about stylistic distinctions, clown and commedia, and the ways of effectively communicating these skills to students. I did lose touch, though. There's something to be said for working with total abandon, just throwing oneself into it and leaving every last drop of energy and idea in the rehearsal room. I used to do it instinctively, and have been thinking that because it didn't come naturally anymore, I was past it. It's nice to know not only that I'm not past it, but that it can still nourish me in a particular way.
What it does not nourish, of course, is my back, my hips, and my heretofore cherished sleeping habits. There is comedy to be had even in my journey of simultaneous rediscovery of enthusiasm and what that costs. Caffeine intake is at a two-year high, and I find myself feeling almost immortal in the rehearsal room, and drowsy to the point of being nonexistent at home. Yet in all that, I have been better about exercising in the mornings before work. Momentum is a powerful force. (So are restless cats.) I'm fairly certain that I'm losing track of myriad things, and we're going into our production week, so that's probably only going to get worse. There may be a little hell to pay down the road for letting other things slide now, but I'm not sure the tunnel vision of the push to an opening night can be mitigated terribly much. I've missed that too.
The genius of the original screwball and romantic comedies is that falling in love is a rebirth, in every sense of the term. That's why love stories make such potent genres, why television and movies try to work them into any and everything, and why we keep swallowing them up. There's trial and suffering, with the greatest of payoffs: A new life. Love resurrects, and laughter gets us through all the torment leading up to it. Maybe this all sounds too pretentious to be accurate, but even the zaniest of stories can come from profound emotions, and the satisfaction of any comedy is coming out smiling a bit more, seeing things with a little more humor. It's been fun falling in love with this sort of theatre again, strong-willed woman that she is, and I'm grateful for the bruises.
Etched by Jeff at 12:29:00 PM No comments: