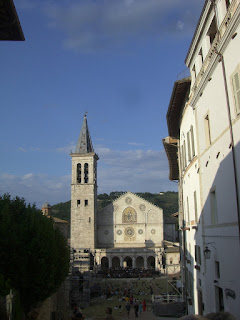 So. Hi. Sorry for the adamant lapses, but I am at this moment sitting in a tiny piazza in Montefiascone where we have discovered available WiFi. This is tantamount to finding gold, or an Etruscan ruin heretofore undiscovered, hence the long delays. Also, we are busy. Very, very busy, so I can't even pre-write and load an entry all that easily. I could no doubt find a few hot spots in Rome tomorrow during our little trip to see a Plautus show in the Roman ruins, but I'll be honest with you -- I care more about my shoulder hefting about Gracie here than I do about 'blogging. Mi dispiace. I'll make it up to you, I promise.

It goes well with me here. Every day is a new adventure in highs and lows, and everyone has had their little panics, but on the whole the group is amazing and the work is wonderful. We've seen no less than three theatre productions of various sorts (not including tomorrows), learned a lot of Italian, learned a classic Scala scenario, been to the hot springs and an arts festival in Spoleto, had some time at il lago di Bolsena, had master classes with two Italian actors, some great meals, and Friend Heather and I even performed our clown Romeo & Juliet for a crowd of appreciative Italians in a renovated Spanish amphitheater. It goes well with me here.

I miss you all, but I wouldn't have missed this for the world. I'll write more in detail soon. Or later. That's me being very Italian . . .
Etched by Jeff at 4:16:00 PM No comments:

You're not in Rome, though. After much run-walking over cobblestones, you're here: 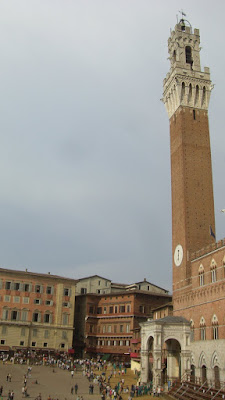 After a good pause for a refreshing beverage (which helps you recover from the embarrassment over having covert-sprinted amongst all the laid-back Italians) you set about trying to figure out how to get a ticket. Your friend, who speak much better Italian than you do, works it out. E la: 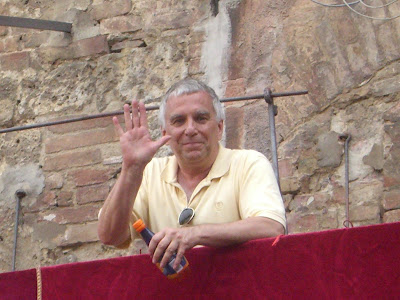 So, you've got good seats. The seating is right beside the course, which runs the entire circumference of the (very large) piazza, and has been covered with tightly packed earth specifically for the event. I mean to say: You are RIGHT THERE. It's hard to believe someone's actually going to bring a semi-wild animal that close to you on purpose. It's also difficult to believe that you needed to rush so, because the piazza still looks like this: 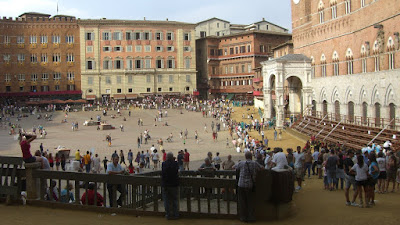 But, you know, you go with it because your friend speaks better Italian than you, and has been to this event before, and because just maybe this will be a memory of the sort that never goes anywhere it can't be remembered again. It's good you kept these things in mind, because within ten minutes, the piazza goes from looking like the above to this: 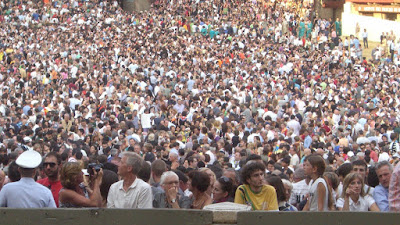 There is much accepted pomp and circumstance prior to the main event. The city, you see, is divided into various neighborhoods that are represented by animals. The tortoise, the porpoise, the little owl, etc. These contradi are the participants in the race, and whoever wins the real race (the next day) gets bragging privileges for the rest of the year. So groups gather, songs are sung, children are corraled into choral groups and everyone has a boisterously good time. It's hard to imagine it getting more intense for the real thing, but it surely must. Juxtoposed beside that sort of contemporary hootenanny is medieval ceremony, such as a procession of the city emblem: 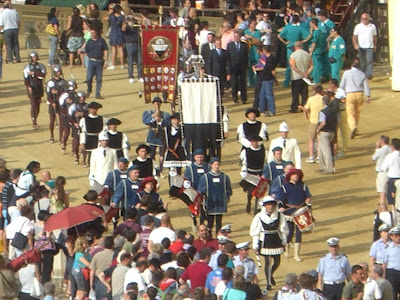 The real deal. See those guys in the back? Plate mail and wicked pikes. Wicked pikes, man. Further traditions include really skilled flag-twirling/dancing and processions of drummers, etc. The last little pre-show bit is the procession of what I assume represent the city's cavalry. These fellows march in, their horses high-stepping beautifully, swords raised: 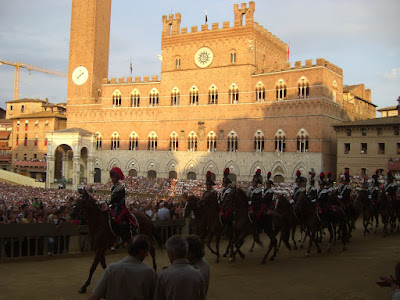 Then you know what they do, after completing a lap? They point their swords forward and haul ass for a lap! In formation! It's seriously amazing. If I saw these guys bearing down on me, forget it. Even if I had a cannon or two. I'm going home and watching it on the news. Good luck, everyone else. Of course, after that, some clean up is necessary. 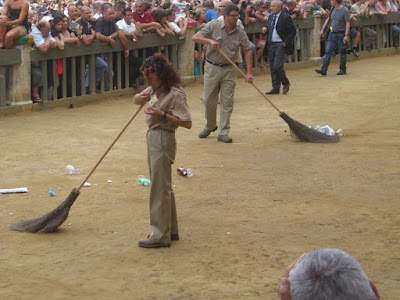 Dudes with brooms. If that isn't old school, I just don't know what is. After all these things rad, they get set for the race itself, including the latest technology. Ropes, for example. Very large ropes. 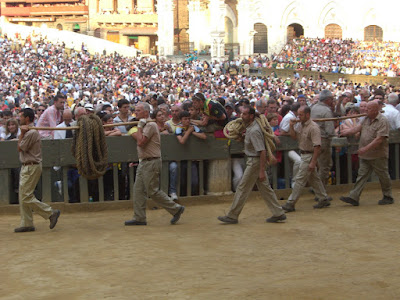 Which are spring-loaded. You know, to contain the semi-wild horses and their death-hungry riders. It's like some terrible idea of a horse race dreamed up by a Dungeons & Dragons (TM) -obsessed fourteen-year-old... 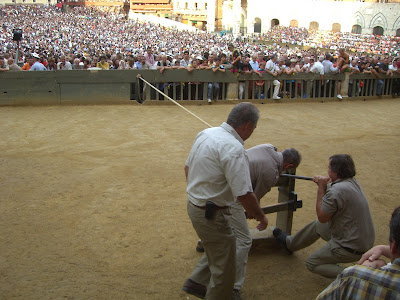 Yes, I am that fourteen-year-old.

Anyway, the horses arrive one by one, bearing the crests of their particular contrado. We got to sit right in the section where the horses begin, between the two ropes. It is due to this buona fortuna that I present to you contrado Lupa: 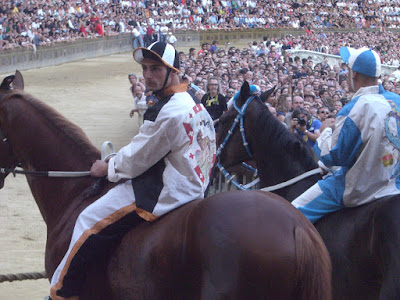 Now the really, really good stuff starts. It takes forever for the horses to get in line. I thought this was simply because, well, they're semi-wild horses. Ah, no. It turns out that it has something to do with signals the riders are getting from the officials/palio-captains of their contrado. Those people are standing -- as they have done for hundreds of years -- on a double footbridge that spans an alley between two buildings of the piazza. They are signaling their rider to be slow, or agitate his horse, or freaking kick the guy beside him. It's like baseball, with all the hand signals. It's part of the game, but the part that goes largely unacknowledged. This is, in fact, a primary reason for having a rehearsal for the event! The tortoise is the last contrado to enter the corral, and he sits it out for a long time, his rider's face as placid as the Buddha's, while the other horses and their riders kick and shout and otherwise try to hold it together.

You'll have to forgive me, because it started even faster than I could have imagined, so I don't have the beginning. I also don't have the end, because as soon as it was over people started climbing off the stands behind me to congratulate the winner and see if the guy who fell off his horse had died. (He didn't.) But, well, the final event of the thing is, simply put, this: 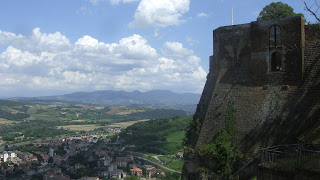 It's been about a week and a half in Italia, which means we're in our third day of classes with the students. This also means that I have finished my third day of Italian classes, which means that my grammar and syntax may come across a little...funny...at certain points of this. Mi dispiace! The good news is that this trip and its classes at Lingua Si are improving my comprehension enormously. The bad news is that it sometimes makes me say things like, “The gelato likes to me.”

I'm writing you from one of the more impressive views of mountaintop Orvieto, sitting at a park bench not fifteen feet from a sheer cliff's edge facing roughly northeast (I think). Behind me a little ways are the ruins of an Etruscan amphitheater, and my stomach is full of pizza. It's roughly three o'clock, and it's been a good day in spite of some challenges. Such as barely being able to walk down stairs for the past two days, my knees occasionally buckling unexpectedly toward the cobblestones. You might think that given my situation, nothing could be better. And that's true, in many ways. We teachers, David Zarko, Heather Stuart and myself, have had a week here to prepare before the students arrived last Sunday, and we made good use of it. We had many adventures and misadventures the which I will write about at some point when there's more time and convenient internet access – including attending la Prova in Siena, the dry-run of their famous horse race, il Palio. (You may have seen shots of that in the latest Bond movie, Quantum of Solace.) For now what's more pressing is to talk a little about the work.

It's fascinating, thus far, what's different and what remains the same when comparing this trip to 2006's. The reason I'm staggering about this year hasn't so much to do with drinking wine with my lunch; rather it's because this week we have four days' worth of commedia dell'arte master classes with Angelo Crotti. As anyone who's met Angelo knows, he is a man of great strength and energy, and he has no problem asking as much from his students. Monday he took us through an hour's worth of strengthening exercises that kicked off the pain-fest, and yesterday he continued with various exercises and added some very committed, very acrobatic animal movement. All this, of course, in addition to working on the many postures and movements of the commedia dell'arte archetypes, most all of which involve raised arms and deep stances. I love it, but next time I'll be training up to it rather more. Jogging, she is not enough.

It is an amazing experience, studying Italian all day, then working intensively on traditional commedia in the evening. Angelo's techniques, talent, and not to mention his gorgeous masks, make for a very challenging, expanding experience. Perhaps even more amazing is to watch the students – all with varying degrees of experience and context – take on these incredible tasks. Some of them have never even seen commedia dell'arte before, yet they're finding moments of great expression in approaching it. Most of them have little to know experience conversing in Italian, yet every day they manage to communicate more and more with it. (For me, for the first time, the language feels useful rather than intimidating – just as a personal sidenote.) Everyone's a little (okay – a lot) frightened of the ultimate goal: To perform an original commedia dell'arte scenario in Italian, for Italians. Yet that is just how we were in 2006 as well, and it turned out to be wonderful. I'm sure none of us expected to be able to hold a conversation in Italian on the first day of classes, either, but we all did.

The major difference between our last full program and this one is the amount and variety of training and practice we'll be making use of. In fact, we're only spending this week in Orvieto. Next week we'll be back for brush-ups in Italian, but largely we'll be in Aquapendente at Teatro Boni, our artistic host. There the students will take classes with Andrea Brugnera and we'll begin the work on the actual Scala scenario we're using, The Two Faithful Notaries. That, too, is when the major events begin. So far we've only had meal-oriented ones – and those are of course great – but starting at the end of this hard-working week we start seeing sights and shows. Hopefully I'll be able to write about those individually as they occur...or anyway, soon after when they actually occur.

I've done a lot of reflecting during all this, of course. Italy is enticing, exciting and extremely challenging to me, all at once. I've had some major (insofar as my experience extends) victories on the trip already, as well as some harrowing moments and, let me face it, outright failures. Yet the failures have been more productive, somehow, than I've allowed them to be in the past. We're trying to teach, after all, that risk and mistakes are great tools to improving communication. It seems I take that lesson more and more to heart the more I challenge myself in this way. God, is it challenging! Which is both an outburst of frustration and an exclamation of thrill.

I'll write more soon, e vero. Until then, may the gelato like to you as well, my friends.