One of the things I find interesting about the silly season is how miraculously it makes me multi-task to the point of forgetting really basic priorities. It's a little bit like how I remember skiing to be, back in my gilded youth when I skied somewhat regularly. I would get going on the up-and-down of it all, five o'clock would roll around and I'd begin to wonder why I felt dizzy and my eyes had dried up in my head. I don't forget to eat and drink around Christmas, but it's close. I was fortunate enough last week, however, to have a nice, centering ACTion Collective event to anchor me in spot for a bit. Just long enough to plant a cream pie in my merry face.
This, our third event -- ACT III: Nyuck Nyuck Nyuck -- was an intimate and rather relaxed affair. The "cocktail hour" period was spent with all in a single, spontaneous circle of chairs, which was a first. We had a total of about nine there, including Andrew and myself, partly a result of three last-minute cancellations due to holiday complications. None of this was surprising, of course. We wondered in planning ACT III whether it made sense to adhere to our not-yet-a-schedule in the face of everyone's holiday, and decided we should, for a variety of reasons. Several of the people who did attend last Thursday's event specifically scheduled their holiday plans to make time for it, and we learned a lot as a result of the smaller group.
The goal of the evening was to play comic two-hander scenes as well as possible when they are selected at random. We emailed the scenes in advance, save a couple that Friend Nat brought in that evening, and asked everyone to have a passing familiarity with them so they wouldn't be handed a scene with absolutely no context. Of course, how much of those attachments people chose to read was out of our control, and it seemed that some were more familiar than others. Nevertheless, no one was quite out to sea, and some people really brought on some interesting work . . . both intentionally, and accidentally. Nat himself chose a scene from Moliere's Tartuffe that, for reasons of an error in transcription, switched the roles midway. He and his scene partner rolled with it, though, and it was a very nearly seamless transition -- it became practically a deconstruction of the scene. Moreover, with the smaller group everyone had a moment or more to really shine and create something memorable.
Our game mechanics did not function quite as well as I had hoped they might, and it's difficult to identify exactly why that might be. Certainly part of it was that very few people were willing to repeat a scene that had gone before, which led to a deflation of a big part of our idea: that actors would build on one another's work. I had every title in the hat twice, to safeguard against this possibility, but it quickly became evident to me that there was in our group no enthusiasm for repetition. I think we'll return to this idea with a different (and stronger) structure, because I'm excited by the possibilities in collaborative character-building and scene-work. When it is the focus of an event, I think we'll have some very interesting results.
The exercises were bookended by a set-up and a payoff (though I muffed the timing of the set-up a bit by brazenly forgetting to mention it until we had already started). We started (almost) out by mentioning that, by the end of the evening, someone would be hit in the face with a pie. This was Andrew's idea at some stage of brainstorming, but I was 100% behind it. Zuppa del Giorno has been trying to incorporate pie fights into our shows for years, and I was eager to see it in action. Fortunately for me, I was eager to see it from any perspective. What we did not reveal until later in the evening was that it was a choice between myself and Andrew as victim of the pie toss, and that everyone was going to vote. It would seem I was a little too expressive of my enthusiasm for this idea, however, because the decision to have me picking shaving cream out of my nostrils 60 seconds later was in fact unanimous. Pow. Right in the kisser. 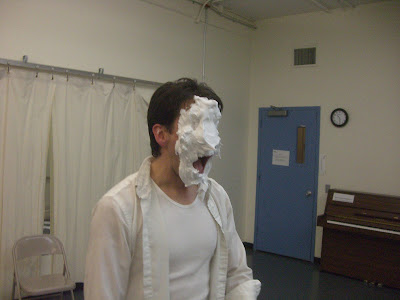