Jeff Wills (AEA) is an actor, writer, teacher and sometimes circus performer. He grew up in the suburbs of D.C. and has lived in NYC his entire adult life. He's married and in his early thirties, and constantly has to describe himself as a part of marketing himself as an actor. As a result, he has developed a real aversion to referring to himself in the third person, and I will stop that nonsense right this very moment.

I've been acting professionally for a little over a decade, but started performing pretty shortly after I realized I could talk and move simultaneously, and that a couple of people really enjoyed that. My handwriting is laborious and real crap. Sanskrit. Cuneiform. You can make all the jokes you want, Roxanne-style, and I promise you I will have heard them. I only mention it by way of explaining the writing thing, which is that one day those two audience members I mentioned gave me a typewriter, and from there on I have been clackety-clacking away with tremendous delight over the speed and neatness with which I may do so. 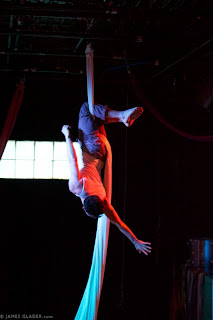 So, from about my teendom on, my career - such as it is - has been dictated by an abiding love of theatre and writing. In high school I played in every play I could, and worked on the school literary magazine. College found me an acting major, creative writing minor. Adulthood has found me floating precariously and happily just above the poverty threshold as I act in New York and regional plays and film, and do as much writing as I can muster, lots of it on this here 'blog, and therefore lots of it about theatre, New York, etc. All of my legitimate work can be found on my resume and website, where you'll see that I have quite a bit of experience and training in physical theatre, with an emphasis on the commedia dell'arte and circus skills.

There are one or two things I like that also don't necessarily have anything to do with some form of storytelling. In no particular order: my wife, poetry, hats, architecture, martial arts, sculpture, climbing things, subterranea, puppetry, metal (the music), board games, Scranton, cooking, forests and Anton the Cat.